The BoJ Jumps The Monetary Shark - Now The Machines, Madmen And Morons Are Raging 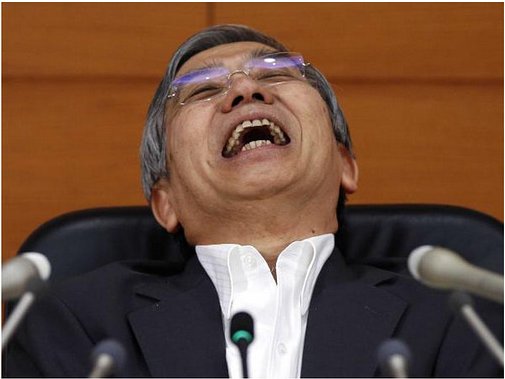 ...The scheme is so insane that the surge of markets around the world in response to the BOJ’s announcement is proof positive that the mother of all central bank bubbles now envelopes the entire globe. Specifically, in order to go on a stock buying spree, Japan’s state pension fund (the GPIF) intends to dump massive amounts of Japanese government bonds (JCB’s). This will enable it to reduce its government bond holding - built up over decades - from about 60% to only 35% of its portfolio.

Needless to say, in an even quasi-honest capital market, the GPIF’s announced plan would unleash a relentless wave of selling and price decline. Yet, instead, the Japanese bond market soared on this dumping announcement because the JCBs are intended to tumble right into the maws of the BOJ’s endless bid. Charles Ponzi would have been truly envious!

...So 5-year JGBs yielding just 11 bps are an insult to rationality everywhere, and a warning that Japan’s financial system is a disaster waiting to happen. But even that is not the end of it. Having slashed its historic holdings of JCBs, the GPIF will now double it allocation to equities, raising its investment in domestic and international stocks to 24% each.

Stated differently, 50% of GPIF’s $1.8 trillion portfolio will flow into world stock markets.  On top of that—the BOJ will pile on too—-tripling its annual purchase of ETFs and other equity securities. This is surely madness, but the point of the whole enterprise explains why the world economy is in such extreme danger.

Hoosier's note: Given the ECB's Negative Interest Rate Policy and BOJ's massive injection of liquidity, my view is that we are going to see a continued Bull Run in the stock markets around the world...until the 2016 US Presidential Election.